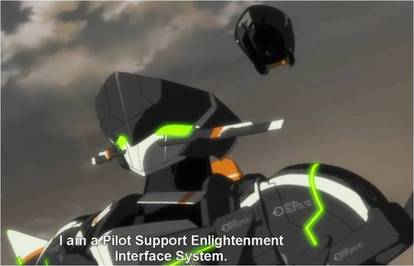 One of my craziest and also most ambitious projects. Guess this one will take years to develop, but well, I better start now if I want the possibility of it getting finished...

So, last week I finished Suisei No Gargantia, a space/slice-of-life/mecha anime written by Gen Urobuchi. It was so-so, the middle was kinda boring, the end was great! And it had this awesome robot A.I. called Chamber, or Cheimba in Japglish, heheh, who besides providing fighting support to the pilot in order to fight the alien menace, also provided counsel and as he himself stated, "Enlightenment" by giving information and suggesting courses of action. Its pretty much like Iron Man's J.A.R.V.I.S. but much cooler and more interesting to watch as it learned and developed along with the protagonist. He's such a bro!

So I thought, why not work towards designing an A.I. human support system? So this is the beginning of the C.H.A.M.B.E.R. project!

Of course I couldn't be the only one crazy enough to attempt it, as it forms one of the basis of domotic systems. Here I'll be uploading the links for several similar projects: