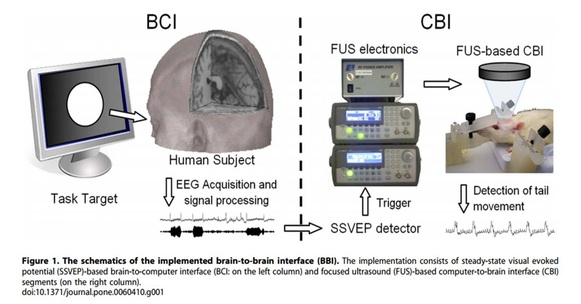 The goal is to make the interface as transparent and well integrated to all aspects of life of the user; in order to do that the user must be able to access the functions in the easiest way possible. And what best integration is possible than being able to control his applications and operate his life with but a thought?

Taking this a step further is the possibility to receive feedback from the sensors and "reprogramming" from the system's algorithm hoping to, in a future, being able to adjust thought patterns and eliminate bad or harmful behavior with the goal of improving efficacy, efficiency and optimize performance.

All that was thought impossible in the earliest times of the computers but thanks to recent developments in computing technology and a greater understanding in the mappings of the brain, it has become a possibility to transmit and receive signals and codified commands to and from the human brain.

I've researched in the following papers for the best way to get and transmit signals to create BCI (Brain-Computer Interfaces) and CBI (Computer-Brain Interfaces).